Understanding the liberty and freedom in this field, some Individuals, Activists, Journalists and organizations have tried for News Portals mostly focusing on Muslims or established by Muslims. TwoCircles.net, MuslimMirror.com, Beyondheadlines.in, IndiaTomorrow.net, Ummid.com, Maeeshat.in, ClarionIndia.net and Aamnasamnamedia.com, are some prominent news portals. Rashid Azeem sahib is the Managing Director of AamnaSamna media network, working tirelessly without any fear or favor since last three years. It has a news website and provides content in three languages also a News Channel on YouTube, 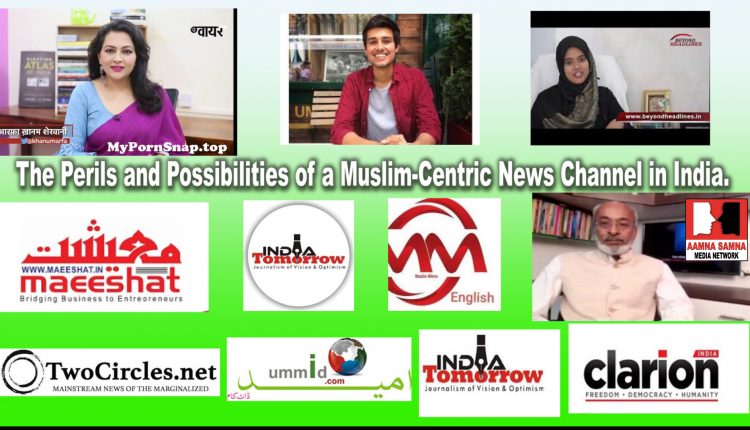 The Perils and Possibilities of a Muslim-Centric News Channel in India.
Article By Journalist : Rehan Ansari
Ravish Kumar, famous and Magsaysay award-winning journalist from NDTV,
calling Muslims to form their own media house or a news channel to counter anti-
Muslim propaganda went viral on social media. Although, he denied issuing any
such audio which has generated a lot of debate among Muslims for and against the
need for Muslim owned news channels.
No doubt that Media specifically most of the News Channels are spewing venom
against Muslims but it will be naïve to assume as “Complete Truth”. The media
today, in totality, has lost its Objectivity, sacred to the News, has become a tool
and spokesperson of the ruling party. It is also guilty of suppressing the facts and
adverse news stories, even to the extent that Dissent with the government is
criminalized, demonized and even abused on a live show. They question the
opposition and also the Military when an anchor of a famous news channel
reportedly said, “It is the responsibility of the Army to stop the infiltration at the
border” when people denounce government inaction after China entering our
territory in Laddakh. Poor Farmers’ suicide is also misreported even conspiracy
theory is created about the new farm suicide numbers, noted, Rukmini S, a data
journalist. Oxfam India and Newslaundry, in August 2019, released a report, &quot;Who
Tells Our Stories Matter: Representatives of marginalized caste group in Indian
Newsrooms&quot; finding the under-representation of Dalits and dominance of the
upper cast in the newsrooms.
Thus, the Indian media, the fourth state of democracy, has turned hostile to the
very people, it has traditional serve.
Media behavior did not change overnight but followed a process. Readers and
viewers and in other words, the Indians are termed and treated as Consumers. It
has turned from Nehruvian’s socialist conduct to the hardcore capitalist and now
the political party in the government with their corporate friends is setting the
agenda and the narratives in the country through News channels and their blue-
eyed Anchors.

Some brave hearts, brilliant minds, and committed journalists are trying to
intervene and stop this anti-people approach. They are trying hard to distinguish
fake news from the real ones, trying to write news and stories in the public interest,
exposing the corruptions and double standards not only of the politicians but also
of their fellow journalists.
News channel broadcasting in India requires government scrutiny and approvals
for uplinking and downlinking, clearances from MHA for the directors of the
company, formation of a company from the Ministry of Corporate Affairs, etc…
Establishment Cost, Operating Cost and after the government clearance, the most
important part is the distribution of TV channels which determines its visibility for
the viewers and generates “the TRP”, a prerequisite for the advertisers.
It is a fact that any newspaper or news channel cannot survive on its own or the
advertisement revenue only. Starting a group of channels in a different genre, like
General Entertainment Channel-GEC, which gets most of the eyeball, Sports, and
Film Channels, that have more TRPs than a News channel, is one of the business
strategies followed today. Companies provide enhanced visibility to the advertisers
in this competitive market with the channels in a different genre. Another strategy
is to own the distribution network i.e. the DTH network like Zee owned Dish TV,
to neutralize the distribution cost. More so the government both Center and State
support, in the form of advertisement for their social and welfare schemes and
subsidies or allotment of Lands for the operating cost to maintain their sovereignty
and independence. Thus, No news organization can survive on their own without
government support or other revenue models for the operating cost, which is huge
and recurring.
Some prominent organizations and Muslim Activists are also trying but with few
exceptions, most of them are struggling not to fail. Madhyamam, a Malayalam
daily with 18 editions, 9 in India and 9 in the Gulf region and Media One TV
channel in Kerala could lead the list of successful media ventures by Muslims both
in terms of their approach and commercial viability. Their coverage is not limited
to Muslim Only news, but their success is attributed to their mainstream news
coverage with the pro-people approach and team of the secular journalist.

The Digital revolution has unlocked the world. The world without borders and we
are the Global Citizen now. This globalization has empowered common people and
given them the platform to express their views. It can be understood by an example
that although, an Indian can&#39;t elect the American President but can surely influence
Americans in favor of or against Donald Trump. Digitization has created an
opportunity to reach the people directly or to the Target Audience through Web
portals and Web channels. This area still has less government and legal
interference and has increased the audience base. The cost of establishment is also
limited and viewership is not dependent on highly professional distribution
companies.
In the digital world, Content is the King. Dhuruv Rathi can get millions of
subscribers and followers on YouTube, Saket Gokhale can expose the corruption
on Twitter, Rana Ayub’s article in New York Times and Swati Chaturvedi’s piece
in Gulf News can be read in India, Rohini Singh can break the stories on the Wire,
a news portal. Arfa Khanam can debate on any given issue on the Wire. Barkha
Dutt can travel all over India and cover the plight of poor and migrant laborers
during lockdown due to pandemic in her Mojo Story. The operating cost requires
mainly for hiring good journalists; Digital Marketing Team and some technical
knowhow.
Understanding the liberty and freedom in this field, some Individuals, Activists,
Journalists and organizations have tried for News Portals mostly focusing on
Muslims or established by Muslims. TwoCircles.net, MuslimMirror.com,
Beyondheadlines.in, IndiaTomorrow.net, Ummid.com, Maeeshat.in,
ClarionIndia.net and Aamnasamnamedia.com, are some prominent news portals.
Rashid Azeem saheb is the Managing Director of Aamna Samna media network,
working tirelessly without any fear or favor since last three years. It has a news
website and provides content in three languages also a News Channel on YouTube,

Although they have served and are aiding more than their capacity and brought
many stories that influenced the mainstream media, sadly, every portal has its
painful struggle and a Tragic Story related to raising capital, donations and
crowdfunding. It is the subject of research and documentaries which is a

prerequisite for any Muslim Only Media venture in India. Most of their editors and
owners are known to me personally since I was and am one of the freelance
associates. Each one of these portals requires a separate and detailed article.
The situation, today, demands more pro-people news portals and channels
established for Justice and Peace and to counter the communal and divisive
narratives of the mainstream media.
There is also the space for Muslim-Centric News portals like
BlackNewsChannel.com based in Florida, USA, launched in 2020. In About us,
the blacknewschannel.com explains its mission is,” to provide intelligent
programming that is informative, educational, entertaining, inspiring and
empowering to its African American audience.”
The fact of the matter is that we are living in a time in India, where even Mr. Kapil
Sibbal, former Cabinet Minister of India and leader of Indian National Congress,
could not run a News Channel, Tiranga TV. Raghav Bahel, the father figure in the
News Channel industry at par with Prannoy Roy had to sell his TV18 group and he
is still struggling to get the license for the News Channel. He has also turned to the
web world and started the Quint.
At a time when Barkha Dutt, Karan Thapar, Punya Prasun Bajpai, Abhisar Sharma,
the leading names in News channels, who question the government are cast aside,
Web Portals are the only viable option left till we see any regulations curbing the
freedom of the digital world.