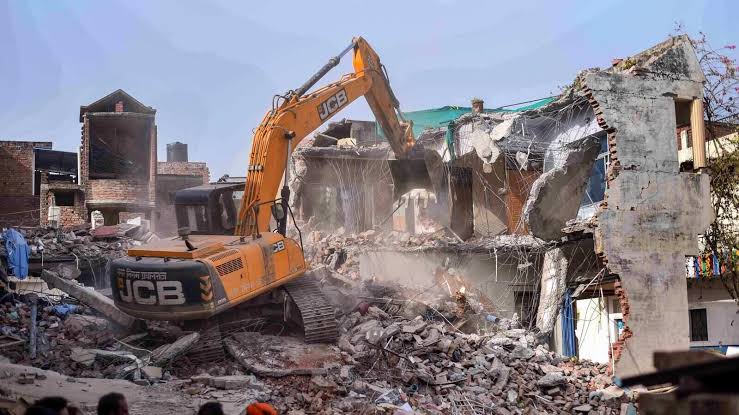 New Delhi 13 June 2022
Jamiat Ulama-i-Hind has approached the Supreme Court against the illegal demolition operation in the state of Uttar Pradesh for the past three days. Protests erupted in the city of Kanpur after Nupur Sharma and Naveen Jindal insulted the Prophet, during which riots broke out. On the one hand, Muslims were unilaterally arrested in the riots, on the other hand, over the last three days, the administration in Kanpur, Prayag Raj (Allahabad) and Saharanpur cities have started damaging the properties of Muslims and bulldozed several houses. Gulzar Azmi, head of Jamiat Ulama Legal Aid Committee, has become the plaintiff in the petition.
In this regard, Jamiat Ulama-i-Hind today filed two interim petitions in the Supreme Court of India. The apex court had on April 21, 2022 issued notices to Madhya Pradesh, Uttarakhand, Gujarat and Delhi, including the state of Uttar Pradesh, seeking their response to the bulldozer demolition operation.
The interim petition filed by the Jamiat Ulama-i-Hind states that illegal demolition proceedings are being carried out illegally even after the Supreme Court had issued notices on the demolition proceedings in the past, which must be stopped. Also, action should be taken against those officers who have damaged the property of Muslims by violating the law.
The interim petition states that according to the law, fifteen days notice must be given before any demolition operation. Also, according to Section 10 of the Uttar Pradesh Building Regulation Act, 1958, the party should be given a fair chance to clarify his view before the demolition operation. Similarly, under Section 27 of the Uttar Pradesh Urban Planning and Development Act, 1973, 15 days notice is required before any demolition action. At the same time, there is a right to appeal against the decision of the authority. Despite this, bulldozers are being run.
The petition further states that the Uttar Pradesh government has started illegal demolition operations by violating the law, which has created an atmosphere of fear and panic among the Muslims. Therefore, the court should issue an order to the Uttar Pradesh government to stop the demolition work immediately and if they have to demolish the illegal buildings, they should do so in accordance with the law. And the law requires that notice be given first and then the opportunity to clarify his view.
The petition further states that by posting notices the night before, demolition action was carried out in several places in strict police arrangements due to which the victims could not even approach the court.
Also, in this atmosphere of fear, the victims are unable to approach the court directly. The Supreme Court is currently on summer vacation. Jamiat’s lawyers Sarim Naved and Kamran Javed requested the Supreme Court Registry that in view of the sensitivity of the matter, the petition of Jamiat Ulama-i-Hind should be presented before the vacation bench for hearing as soon as possible.