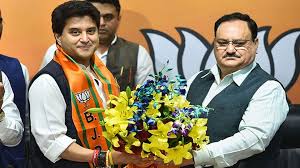 One of India’s only states not ruled by the Bharatiya Janata Party (BJP) is likely to see its government toppled after a top Congress leader defected.

Jyotiraditya Scindia joined the BJP on Wednesday following a day of high drama in Madhya Pradesh, where the Congress party is in power.

“I’m excited to work under the leadership of PM Modi,” he told reporters.

A number of Congress state legislators are believed to be supporting him.

What did he say?

Mr Scindia hit out at his former party saying it had lost direction and had betrayed the people of Madhya Pradesh.

Addressing a packed press conference at the BJP headquarters in Delhi, he told reporters, “the situation within the Congress is not the same as it was earlier. It is not the party that I joined. I am not able to fulfil my aim of working for the country.”

He also thanked Prime Minister Narendra Modi and Home Minister Amit Shah for welcoming him into “their family”.

How did it all start?

The drama began on Monday when at least 17 Congress legislators said to be loyal to Mr Scindia resigned and went incommunicado.