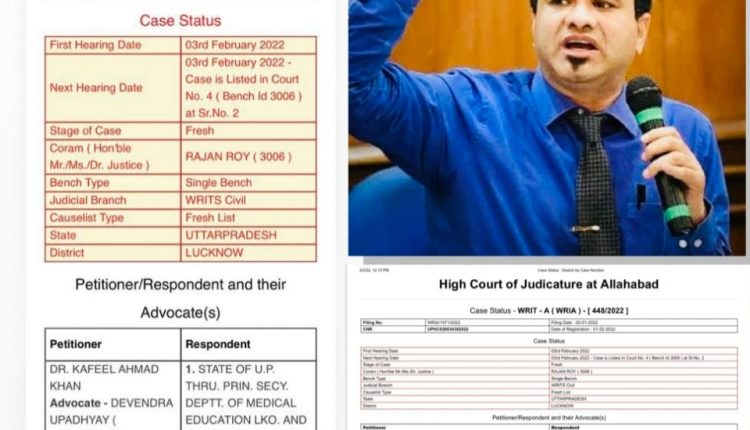 Dr Kafeel was terminated stating that he was doing private practice in 2014 despite the fact that he joined through UPPSC on 08/08/2016 and falsely alleging that he was incharge of encephalitis ward (though he was never appointed on this post ) despite being cleared of charges of medical negligence and corruption while appreciating his efforts to save dying children in that day .

Court has been informed the following facts
1- The honourable Allahabad High Court, in its order dated 25 April 2018, stated that there was no material on record which could establish medical negligence against me individually. Further, the high court also concurred that Dr kafeel was not said to be part of the tender process that result in the enlistment of the entity which was charged with the supply of medical oxygen. Additionally, the high court also observed that the charges under section 7/13 of the Prevention of Corruption Act, 1988, against me had been dropped in the course of the investigation.
2-Dr Kafeel khan has been absolved of Medical negligence and corruption charges by enquiry officer on 15/04/2019.
3-Uttar Pradesh Government has informed the Allahabad High Court on 06/08/2021 that they have withdrawn the re-enquiry order
4-Allahabad High court has stayed the second suspension order on 09/09/2021
5-Dr Kafeel is only one of the eight accused to get terminated rest all got reinstated.
6- In his termination order Principal Secretary Medical education Mr Alok Kumar also accepted the following facts

•Dr Kafeel was appointed on 8 August 2016 as a lecturer on probation and was the junior-most doctor . He had no financial and administrative responsibilities.
-Dr Kafeel was on leave on 10 August – a copy of his leave letter and attendance register were submitted as proof. Despite being on leave on , he had rushed to the Medical college on that fateful night and tried to save every innocent life possible. He and his team managed to arrange 500 cylinders in those fifty-four hours.
• Dr Kafeel called twenty-six people that night, including all the officials of BRD Medical College and the district magistrate of Gorakhpur.
• There is no evidence to suggest Dr Kafeel involvement in corruption.
• Dr Kafeel was not responsible for the payment/order/tender/supply/maintenance of the oxygen supply.
• There is no evidence that Dr Kafeel was engaged in private practice after 8 August 2016.
• The charges of medical negligence leveled against Dr Kafeel had been found to be baseless and without any substance.

• There was a shortage of liquid oxygen for fifty-four hours at the BRD Medical College from 10 to 12 August 2017, and I had indeed arranged jumbo oxygen cylinders to save many children from dying.
• Twenty-three children and eighteen adults died on 10 August 2017.
• Pushpa Sales had written fourteen letters to the authorities demanding a payment of their dues of 68 lakhs, including letters to the CM and the health minister of UP.
• The honourable Allahabad High Court, in a judgement dated 30 April 2018, observed that there was a shortage of liquid oxygen due to the abrupt disruption of liquid oxygen supply, which took place due to non-payment of dues to the supplier.
• An affidavit filed by the UP government in Allahabad in March 2018 had accepted that there was a shortage of oxygen supply.
• The SSB accepted that Dr Kafeel did come on 11 August 2017 asking for help , and they had provided their vehicle and their soldiers, who worked for two days ferrying oxygen cylinders.
•The purchase receipts of the jumbo cylinders Dr Kafeel had paid for.

There are more than 500 doctors and around 5000 employee but they got Dr Kafeel as a scapegoat .