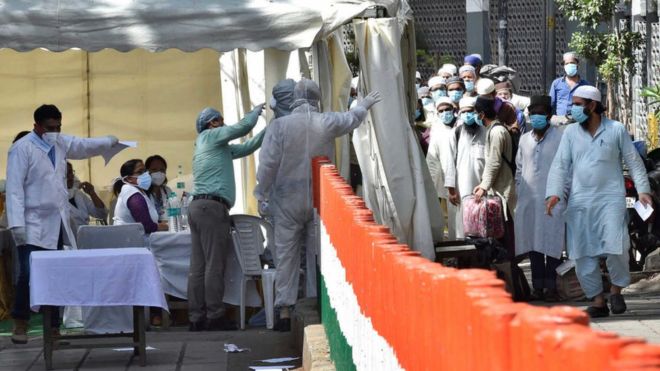 Outrage over a Muslim congregation that has sparked a new wave of Covid-19 cases in India has taken an Islamophobic turn.

States across India have traced more than 300 positive cases to the weeks-long event.

And Islamophobic hashtags have been trending on Twitter since the news first broke on Monday.

“Instead of corona quarantine, we should have hate quarantine,” says historian Rana Safvi.

The gathering was by the Tablighi Jamaat, an Islamic missionary movement that is nearly 100 years old. And its global spiritual centre or markaz is in Indian capital Delhi’s Nizamuddin area.

The event was held there – and it was attended by thousands of Muslims from India and abroad.

Officials are still scrambling to identify and trace all of those who attended, as well as their secondary contacts.

But the cases that are directly linked to the event have risen steadily through the week, exposing religious fault lines in a sharply polarised country.

Even as details about the congregation emerged on national news, #CoronaJihad, #NizamuddinIdiots, #Covid-786 (a number that carries religious meaning for Mulsims), began trending.

“We need to be secular. Religious groups should not hold congregations thinking religion is its own act of survival,” says sociologist Shiv Visvanathan.

Islamophobic memes have also been circulating – one meme, for instance, shows China as the “producer” of the virus, and Muslims as its “distributors”.

Officials believe the infection started with the event’s foreign attendees, many of whom are preachers – this list included several from Indonesia, Malaysia, Bangladesh, Kyrgyzstan.

Mukhtar Abbas Naqvi, a minister in the governing Bharatiya Janata Party, called it a “Talibani crime”.

Indian television news, which has often been criticised for its divisive rhetoric, flashed headlines such as “Save the country from Corona Jihad” and “Who is the villain of Nizamuddin?”

The swift communal turn has also unnerved Muslims – especially as it comes on the heels of deadly religious riots in Delhi, and a controversial “anti-Muslim” citizenship law that saw thousands of Indians take to the streets in protest.