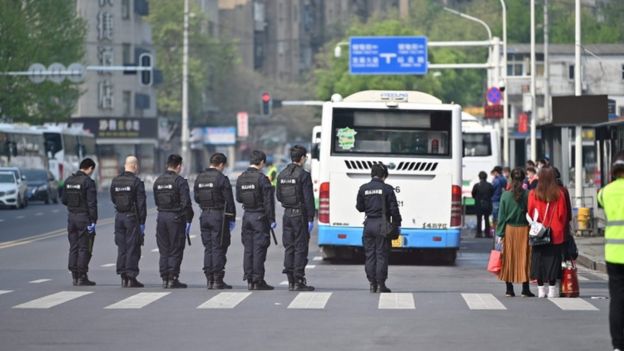 China has mourned the victims of the coronavirus outbreak by observing a three-minute silence, bringing the nation to a halt.

A day of remembrance was declared in China on Saturday to honour the more than 3,300 people who died of Covid-19.

At 10:00 local time (03:00 GMT), people stood still nationwide for three minutes in tribute to the dead.

Cars, trains and ships then sounded their horns, air raid sirens rang as flags were flown at half-mast.

The first cases of coronavirus were detected in the Chinese city of Wuhan in Hubei province late last year.

Since then, the virus has swept the globe, infecting more than one million people and killing nearly 60,000 in 181 countries.

In Wuhan, the epicentre of China’s outbreak, all traffic lights in urban areas were turned red at 10:00, ceasing traffic for three minutes.

China’s government said the event was a chance to pay respects to “martyrs”, a reference to the 14 medical workers who died battling the virus.