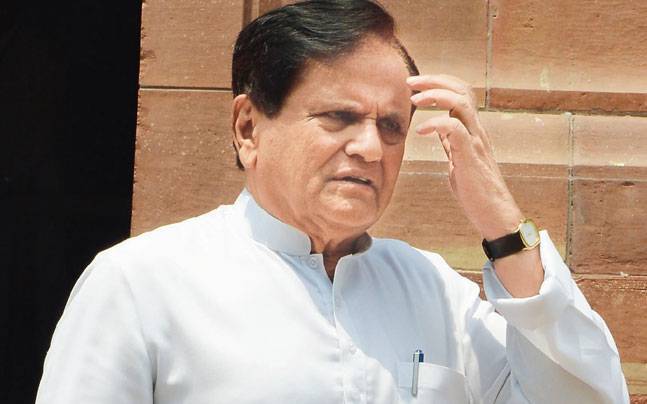 The party requires an experienced, credible and well-networked person to take on the crucial task of raising funds for the upcoming electoral challenge

By Abdul hafiz lakhani Ahmedabd/ New Delhi
In last year Gujarat Assembly election, he was not visible much. Not long ago, every Chief Minister and party leader bowed to him. He kept denying ministerships in every Congress dispensation and established himself as the king of strategy and advisor to his then party president Sonia Gandhi. Known for his grounded, almost invisible public existence, senior Congress leader Ahmed Patel got shot in arm when his appointment as AICC treasurer on his 69th birthday is more than a birthday gift. It indicates Congress president Rahul Gandhi institutionalising the most-entrenched player of the Sonia Gandhi establishment in the new setup.
It is an acknowledged fact that the Congress is staring at a severe cash crunch. And with the Lok Sabha polls coming up in less than a year and key elections in Rajasthan, Chhattisgarh and Madhya Pradesh later this year, the party requires an experienced, credible and well-networked person to take on the crucial task of raising funds for the upcoming electoral challenge. It is for this reason that Congress president Rahul Gandhi has entrusted Patel with the responsibility of handling the party’s treasury. Patel held this portfolio 20 years ago – before he became political secretary to Sonia Gandhi, then the Congress president – and is believed to be the best man for this difficult job.
In the last few years, Rahul Gandhi’s description of the Modi government as a “suit boot ki sarkar” has forced the prime minister to make a conscious effort to shake off the “pro-rich” tag by coming up with a series of welfare schemes targeted at the rural poor, women and farmers. But afraid that he could end up alienating the corporate sector, Modi has made amends by reaching out to business magnates. In July, he said at a government-industry summit that he was not afraid to be seen in the company of industrialists as his intentions were “noble”. Recalling that even Mahatma Gandhi was not apologetic about taking help from industrialists, Modi went on to acknowledge their positive role in nation-building. This public declaration was seen as a message to the corporate sector that the Modi government is not averse to big business.
It is still to be seen if Congress attempts to corner the government on the Rafale deal will resonate with voters. But it could put off potential donors from the business world. In these circumstances, Patel will need all his persuasive skills to get industrial houses to part with their money. Clearly, the new Congress treasurer has a challenge on his hands.
Ahmed Patel, who is also known as Ahmed Bhai or simply AP, is a member of the Rajya Sabha. He is now assuming a high post in the party after two decades. Before this, he was the treasurer of the party from 1996 to 2000.
In his career, Patel has also served as the political secretary of UPA Chairperson Sonia Gandhi – considered to be powerful post. And before Gandhi became the Congress president, Patel was considered to be the second-most powerful leader (after Sonia Gandhi) in the party.
He played a significant role in bringing Congress to power in the 2004 and 2009 Lok Sabha elections.In December 2017, after Gandhi was appointed party chief, questions were raised on the nature of Patel’s role in the former’s new team, with some at 24 Akbar Road debating that he would be sidelined. Nothing of that sort happened.
Ahmed Patel hails from Gujarat. And significantly the change of his party’s stewardship bringing Rahul to the helm took place alongside the Assembly polls in Gujarat. Congress had offered a stiff challenge to the BJP in these polls despite Gujarat being the home state of Prime Minister Narendra Modi. The tone for the battle in the state polls was, however, set by Patel’s election to the Rajya Sabha held a few months before the Assembly polls in Gujarat. Patel won his Rajya Sabha seat, though by a whisker, it was so despite the BJP president Amit Shah’s stiff opposition. The Congress also did better in the Assembly polls than the elections held in the past. So much so that the polls outcome was claimed by party satraps as a sign of the possible revival of Congress’ chances and fortunes.
Polls in Karnataka followed soon after Gujarat where the outcome for Congress was bad enough to dislodge it from power. Yet, the party checkmated a takeover of the state by the BJP. HD Kumaraswamy became Chief Minister through the combined strength of his Janata Dal-Secular and Rahul Gandhi’s Congress party. The virtual coup in Karnataka against the BJP that had emerged as the single largest party in the state polls again reminded of Patel’s successful elections to the Rajya Sabha from Gujarat despite the Congress hardly having enough numbers to make him win and the BJP being all set to thwart Congress’ plans.
With the Congress now in the cold at the Centre as also in so many states, Patel again faces a test of sorts to meet the high cost of putting a weak party on its feet. The party has indeed been becoming too weak over the years in terms of means and resources to take on the formidable BJP in coming state elections of Rajasthan, Madhya Pradesh and Chhattisgarh besides next year’s countrywide polls for the new Parliament.
Thus, Patel’s ascent to the post of Congress treasurer will be keenly watched by both his friends and foes. And if money makes the mare go, the task before Patel is too daunting to be underestimated in any case. How far he succeeds would only be known in the months or less than a year at the most. His success or failure will also determine the fate of some of his contemporaries in the party since many of them had to relinquish their party positions in the wake of its reins now in the hands of Rahul Gandhi.

The writer is the editor ofwww.siyasat.net and gujarat siyasat, Ahmedabad