A MAN ALSO HAS A RIGHT TO DEFEND HIMSELF 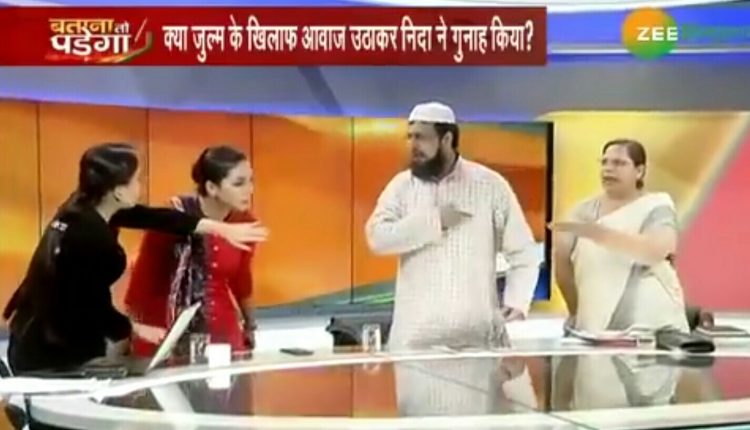 This stanza is dedicated to Mufti Ejaz Arshad Qasmi today, as an individual he has done no wrong by slapping the woman who first slapped him. Here I stand with him as a person and demand arrest of the woman who broke the law in the first hand along with tough action against TV anchor and other participants who fueled this incident. The law of the land and police should equally deal with all the parties involved in any case. Equality in justice is a constitutional requirement and justice must not be gender baised.

However, I have been strongly opposing Mufti Ejaz Arshad or his likes attending any such TRP driven TV debates for last three years because these debates or talk-shows air nothing but are means of further polarisation.

I have personally been invited at different times by many national English and Hindi channels but they preferred not to showcase me or my views either after recording or before recording. I always preferred to participate being in my place and demanded OB Van at my location and uninterruption from anchor, equal time to all participants and freedom to put arguments of my choice etc, if they wish to take me on board in their studios. May be because there were no spice in my arguments or they failed to meet my conditions, following one or two recordings they stopped bugging me for last few months.

Senior scholars, Mufti Arshad’s friends even his teachers from Darul Uloom Deoband, including its VC, privately and publicly, suggested him and his likes to stay away from these debates which are bound to take the country to nagetive ways. He repeatedly failed himself to take the call and shamed us all again and again. Therefore, I also stand to demand here again that his immediate disqualification from #AIMPLB membership be done. The Board is a common platform for all Muslim Indians. It cannot be a place for immature people who cannot control emotions and cause shame, either being on the right side or on the wrong side of any ugly scene. We simply don’t want to watch an Alim is shouting over a woman, whosoever, she may be or two people, even they are males, fighting on live TV shows. It is ugly and shameful for all.

Congress plays hate policy against Indian Muslims : Rahul Gandhi has now put an official seal on his Mus\nlim-hate policy by denying a berth to Chairman, AICC Minority Department, in the list of Special Invitees.