Release of Dr. Kafeel Khan's book on the tragedy of Gorakhpur hospital at Marathi Patrakar Sangh, Mumbai.By All India Milli Council Mumbai and in association with Bhartiya Patrakar Sangh Maharashtra. 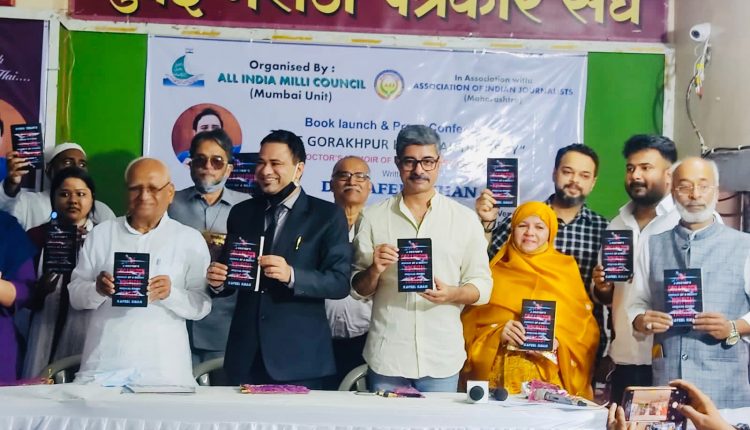 By All India Milli Council Mumbai and in association with Bhartiya Patrakar Sangh Maharashtra.

People of Uttar Pradesh will not forget the dead bodies floating in the Ganga: Dr. Kafeel Khan

Mumbai: By All India Milli Council Mumbai and in association with Indian Journalists Association Maharashtra      Release of Dr. Kafeel Khan’s book on the tragedy of Gorakhpur hospital at Marathi Journalists Association, Mumbai.Former Judge Mr. Kolse Patil presided over the function organized by All India Milli Council Mumbai.Dr. Kafeel Khan Sahab participated in this program as a special guest. Ms. Teesta Setalvad (Leading Civil Rights Activist), Advocate Yusuf Muchala (Supreme Court Advocate), Mr. Sushant Singh (Film Actor and Social Activist), Farhan Abu Asim Azmi (Social Activist), Fahad Ahmed (Senior Research). TISS), Dolphie D’Souza (Former President Mumbai Catholic Sabha) , Advocate Farhana Shah Sahiba (Vice President All India Milli Council Mumbai), Rashid Azeem, President, All India Milli Council Mumbai conducted the conference. Mufti Inamulla Khan Sahib, General Secretary All India Milli Council Mumbai Unit welcomed all the participating guests and explained the purpose of establishment of All India Milli Council Mumbai.Explaining the objectives of the press conference, he compiled a verse from the Holy Quran which says that “I have saved humanity”, and said that we all stand with the courage with which Dr. Kafil Khan has faced difficult situations.Dr. Kafeel Khan was welcomed with a bouquet of flowers by President of the Indian Journalists Association Maharashtra and Editor of Fight Against Criminal Newspaper, Shaheen Patel Media Secretary and All India Milli Council. Aamna Saamna Media Production presented a documentary in which painful scenes of torture in the prison of Dr. Kafeel Khan were presented. The film stars, Alkama Khan as Dr. Kafeel Khan, film’s writer Rashid Azeem, director Altamash Syed, DOP and video editors Altamash Syed and Shaheen Patel. The short film is made under the guidance of Rahim Sheikh.Rashid Azeem elaborated on the proceedings of the conference in his time. Dr. Kafeel Khan’s book was released with great enthusiasm in the presence of all the senior dignitaries.After the release of this book narrating the story of this atrocity, ‘Mahir e Kanoon’ Adv. Yusuf Muchhala honored Dr. Kafeel Khan with the title of “Mard e Momin” with poems by Allama Iqbal and discussed the current situation of the country. Invited to handle the future of India. Describing the reason for his association with Dr. Kafeel, Farhan Abu Asim Azmi said that Dr. Kafeel Sahab saved the lives of hundreds of children by spending from his own pocket. Expressing concern over the current situation in the country, he said that today unarmed Muslim youth are being tortured in the name of justice and we have to face this situation unitedly.Analyzing the present situation of India, former judge Mr. Kolsi Patil said that Hitler, Mussolini etc. were openly dictators but the direct dictatorship which is going on today has left all the dictators behind. And today’s government is very proud, that we all have to break together.And today if Dalits, Muslims and Adivasis do not come together then this war can never be won. Ms. Teesta Setalvad said that Dr. Kafeel is fighting his entire war not for himself but against injustice in the country and we are all with him in this fight for justice.He said that if there was democracy in the country today, Dr. Kafeel would not have to go behind the bars. Dr. Kafeel Khan is an example for Muslim youth and youth of every society should come forward and save this country.And today every section of the society has to break its silence, then only we can be successful. Expressing his views, Mr. Sushant Singh said that people like Dr. Kafeel are being harassed because they are Muslims. But for this he should have been a puncture maker, not a hero. This is a good thing to do, and it should end there. Dr. Kafeel sahab, while performing his duty, handled the cylinder and continued to do the duty of humanity.Dr. Kafeel Khan said that this book not only contains my story but also the story of mothers whose children kept dying in front of their eyes. And why the children of these 63 mothers died in front of their eyes because the government did not give money. And listen one thing, the status of those who run the government in front of them is like those insects which have no status. Dr. Kafeel Khan said that at that time one of my officers told me that if Dalit children die, then let them die, what is the difference. Dr. Kafil Sahab said that this book of mine presents the story of the judiciary in which I was acquitted after 6 months, I still haven’t got my job back, why give justice so much time? My book is the story of a prison barracks. Above all, our book tells us how bad our health system is.Dr. Kafeel tried to explain the reality of the atrocities committed on him and the reality of police brutality. In this conference, the book of Dr. Kafeel was released by the distinguished guests. Vice President of Milli Council, Advocate Farhana Shah Sahiba, Social Personality Abu Farhan Azmi, Social Activist Fahad Ahmed, Sarfaraz Arzoo Editor Daily Hindustan, Former President of Mumbai Catholic Sabha Dolfi D’Souza also spoke in the press conference. In the end Maulana Zafar Alam, Secretary, All India Milli Council, Mumbai thanked all the dignitaries and journalists present. All Milli Council and Indian Journalists Association Maharashtra officials and social workers congratulated Dr. Kafeel Khan.Mohammad Sayeed Shaikh, President of Journalists Association of India Maharashtra and Editor of Fight Against Criminal Newspaper, Syed Babu Shaikh, Editor of Salaam Mumbai newspaper and Shoaib Mianwar Maulana Samiullah Shaikh, Ateeq-ur-Rehman Sir, Nabi Idrisi, Shaheen Patel, Syed Azeem -Ud-Din, Muhammad Arif Shaikh, in-charge of All India Mills Parishad Mumbai played an important role. 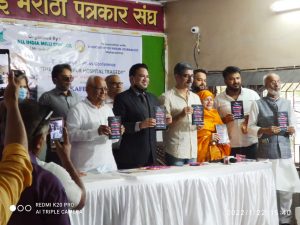 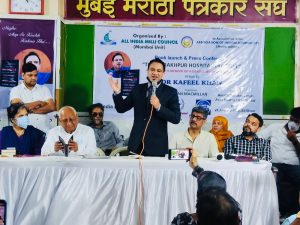 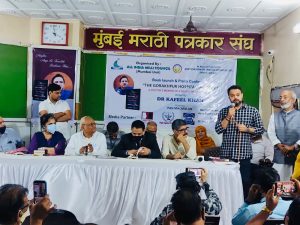 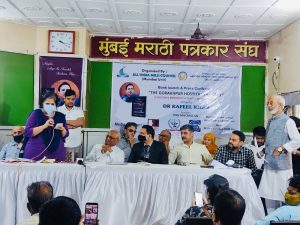 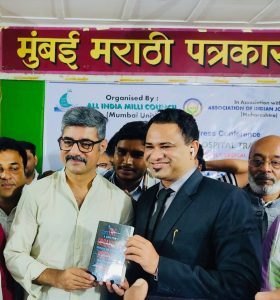 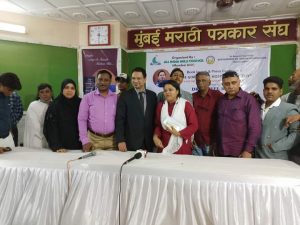