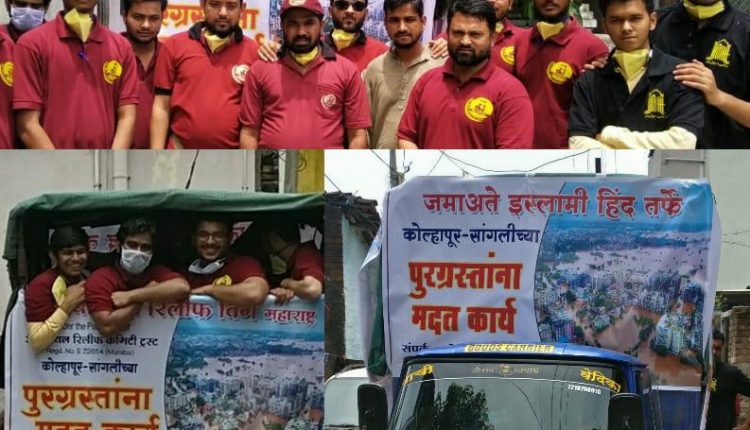 Jamaat-e-Islami reconstruct homes of flood hit village
Kolhapur (Maharashtra)
By Imran Inamdar
In August 2019, there was a catastrophic flood due to continues heavy rainfall in Kolhapur and Sangli District which destroyed entire villages.thousands of people had to leave their houses, thousands stranded ,loss and of property was uncountable.
According media reports As many as 223 villages in the lone Kolhapur Districts had been badly affected. 18 villages have been completely ruined and about 29000 persons affected .
This fury remained for eight days.
In Such a miserable conditions Jamaat-e-Islami Hind Maharashtra unit and Ideal Relief committee trust came forward resettle villagers  by rebuilding houses. In this regard the decision to rebuild the 34 dilapidated houses in Kanwad village in Shirol taluka of Kolhapur district .
The foundation stone of these houses was laid on January 26, 2020. A Memorandum of Understanding (MoU) was signed on January 20, 2020 between Ideal Relief Committee Trust and Zilla Parishad Kolhapur for this project.
Beautifully renovated   houses with some kitchen utensils were handed over to all t the 34 beneficiarues in a simple but dignified ceremony on March 14 at 11 a.m at Mrs. A. A. Patil High School, Kanwad. They were also provided beds, cupboards, dining tables and chairs, kitchen utensils, mixer grinder and other basic household items.
Public service department of Jamaat-e-Islami Hind and the Ideal Relief Committee Trust undertook the repair Urdu and Marathi schools in the village on top priority to restart educational functioning.
Speaking to aamnasamna  Mazhar Farooque  (Secretary Public service Department,JIH) informed that everybody knows about the  damages done by floods.He says that as a moral responsibility our Disaster management team of Jamaat-e-Islami joined the rescue operations and volunteered our services for many days.He further said that Later we found that hundred of village houses were in sorry state, accomodation in those became impossible for villagers.Thus we had decided to reconstruct or renovate houses.
Mazhar further informed, total expenditure of the project is around  1 crore 10 lakh in which Govt share contributed  32 lakh from Flood relief fund and  we raised remaining funds from family and friends for this humanitarian cause.
Our 50 members were on their toes to help people during those challenging days for two months and 32  activists worked for 18 months to complete the house renovation project of the village, Mazhar added further.
“We want to make this village an ideal village. Ideal villages are not only built with cleanliness, good roads, spacious houses and other facilities but people from all walks of life and communities should keep their minds open. Everyone should help each other. If we set an example of unity and solidarity, we will see a prosperous India in this village,”Farooque expressed.
Rameshwar Venjane, SDPO of Jaisingpur, was the chief guest in the event. Zafar Ansari, Secretary, Jamaat-e-Islami Hind Maharashtra, Moazzam Naik, Assistant General Secretary, Human Welfare Foundation, New Delhi, Aparna More Dhumal, Tehsildar, Shirol Taluka, Shankar Kavitke, B.D.O., Shirol Taluka, Salman Khan, S.I.O. South Maharashtra President, Jamaat-e-Islami Hind’s Public Service Secretary Mohd. Mazhar Farooq, District Organizer of Jamaat-e-Islami Hind Western Maharashtra Nadeem Siddiqui, President of Jamaat-e-Islami Hind Kolhapur Anwar Pathan and Sarpanch of Kanwad Dr. Babaso Vanpal Arasgonda were present on this occasion.
Expressing his views, Maharashtra Minister of State Rajendra Patil (Yadravkar) said, “Members of Jamaat-e-Islami Hind have built houses for the flood victims, not to show off but to please Allah. They have served the victims irrespective of religion and nationality.” Zilla Parishad Chief Executive Officer Sanjay Singh Chavan invoked the ideals of social harmony promoted by Chhatrapati Shahu Maharaj and praised the initiative taken by Jamaat-e-Islami Hind. He said that this initiative is a symbol of social harmony.
One of the beneficiary Taigonda Rajaram Hegde Patil, said that we were in great shock , because we lost our homes and everything ,we were unable to understand what to do ,in such pathetic condition Jamaat-e-Islami Hind extended its helping hand , helped us a lot and reconstructed our homes.He further said,we can’t forget Jamat’s cooperation,we will always be grateful.

The event was presided over by Rizwan-ur-Rehman Khan, President of Jamaat-e-Islami Hind, Maharashtra. He said, “All men are the offspring of one parent. We have to work together in times of happiness and sorrow. This will end hatred that has spread among us. That is why we have built houses for our brothers.” 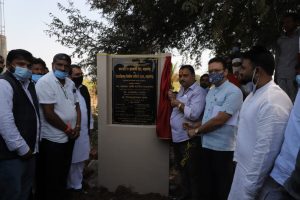 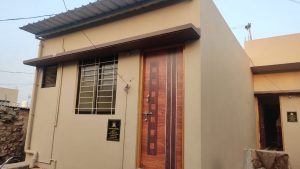