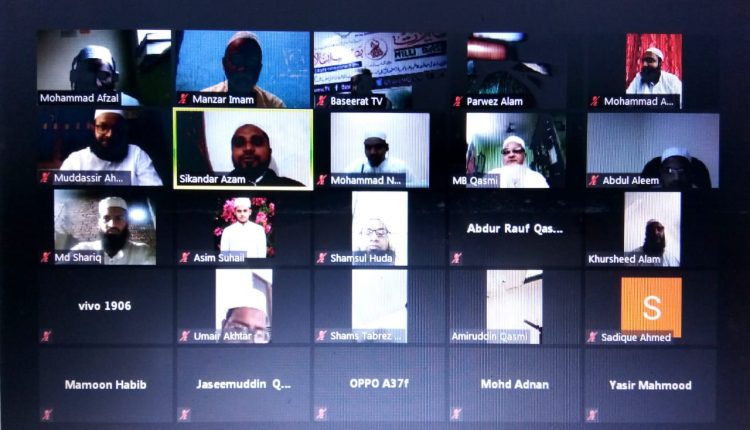 What you derive from social media depends on what you decide

In its first international webinar organized by well-known English language teaching institute MMERC, participants highlight the uses of social media and warns against its misuse, writes Manzar Imam
————————————–
With changing communication styles ulama too are adapting to new modes of communication in order to keep abreast of changing situations. They wish to make the most of the modern means of communication. This was the overriding import of the views shared by ulama and scholars in a webinar on “Positive Use of Community Media and Ulama” held on Saturday, 4 July 2020. The programme hosted by Maualana Burhanuddin Qasmi, director of Markazul Ma’arif Education & Research Centre (MMERC), Mumbai was moderated by UK-based teacher and scholar Maulana Mohammad Afzal Qasmi. It was attended by MMERC alumni from India and abroad.
Some participants gave brief presentations on different aspects of the use of social media. Shams Tabrez Qasmi, editor of Millat Times said that social media provided great opportunity to share one’s thoughts with a wider community. While YouTube can be used for videos, Facebook is good for sharing word messages. For short messages Twitter is a good platform while Apps like Instagram is better for photo-cum-message, he said.
Ghufran Sajid Qasmi, editor of Mumbai-based English-Urdu bilingual Baseerat Online, said, “During last one decade and especially during last five-six years, social media has done an amazing historic job”. While referring to a scholar he said that social media is a double-edge sword. “It is upon the user to decide what he wants from it” because it can be used both for good and bad. He suggested that Muslims and ulama need to work on three areas of education, economy and legal matters.
Maulana Shamsul Huda Qasmi, a teacher of English at Jamia Islamia Ishaatul Uloom, Akkalkuwa, while briefing about the evolution of different social media outlets emphasized on the need for working in group for larger benefit. He said, “A good research background and knowledge of the issues are things which can earn huge dividends while one uses any social media platform”. Good sense and mastery of language are essential qualities for better use of social media. In India as in the world, there are millions of daily active users of YouTube, Facebook, Twitter and other popular media outlets which one can use to convey his message to thousands of people in an instant, stated he.
Delhi-based journalist and research scholar Manzar Imam maintained that days of traditional old media are past and they are now taken over by what is referred to as new media. He said, “Despite being short and handy new media is more powerful and has huge reach and impact”. He said that one needed to be careful about the content one shares on any media outlet as sharing legally wrong things might land one in trouble.
Maulana Burhanuddin Qasmi spoke about creating different groups with different experiences to make better use of the available media outlets. Maulana Afzal Qasmi elaborated on the need for effective use of community media in an age which is conspicuously driven by technology. He maintained that instead of beating around the bush about anything and everything under the sun it is better to work on those areas where one’s voice can be heard. Maulana Muddassir Ahmad Qasmi, Khursheed Alam Dawood Qasmi, Sikandar Azam Qasmi, Qeyamuddin Ansari, Maulana Parwez Alam Qasmi, Umair Akhtar, Jaseemuddin Qasmi, Mohammad Noman, Abdur Rauf Qasmi, Abdul Aleem and others also exchanged shared their thoughts.