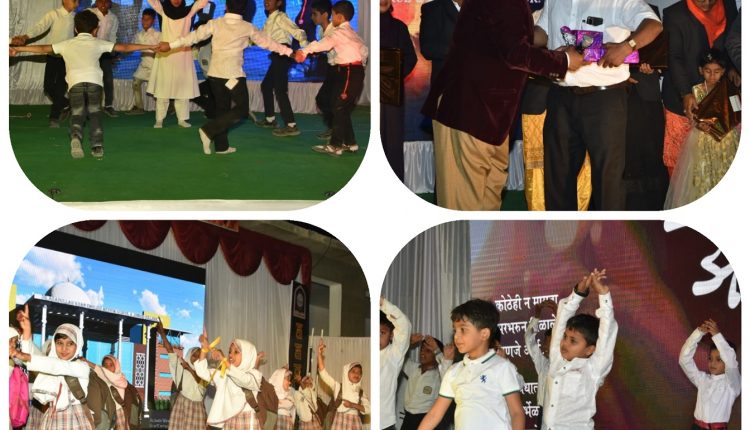 Solapur-Khan Educational campus observes first anniversary
By Imran Inamdar
Solapur (Maharashtra)
Dr.Asadullah Khan English medium  school and junior college (Khan Campus),Hotgi Road solapur the city’s first highly equipped and huge  educational campus of Muslims  celeberated first year of its  establishment over one day long cultural programme of students  and felicitation of eminent citizens by honouring “khan Campus achiever award in presence of MLA Praniti shinde and Usman Jamadar ,Ajay Dasri,A.Karim Shaikh ,Sadullah Khan ,Asif Iqbal Etc.
During the function All the 200 hundred students took part in the cultural programmes with full enthusiasm and  activeness and displayed their skills through patriotic songs, Martial arts,dramas and Qawali.
Khan campus, Solapur is the initiative of Dr. Asadullah Khan who is the General Secretary of the Ünited Education Society , Mumbra ,Dist.Thane. After having discussions with educational personalities of the city he  had finally decided to lay foundation of a well equipped and proficient educational campus to impart quality education in supportive infrastructure.
He bought a plot of ten acres and started  construction of school buildings ground ,swimming pool etc in full swing. Now  around 40 classrooms are ready. According the management , they just have completed 25% work of the proposed plan.  As said, 250 class rooms will be constructed to accommodate about 15 thousand students.
Speaking with aamnasamna.com Dr. Asadullah express  happiness over response and cooperation received  from  locals throughout the year. He said , This was  our first academic year and admissions were satisfactory. It is  just AGHAZ (beginning ) , You can expect revolutionary changes in the field of education in this city in near future and we have mission of one thousand admission for the next academic year 2020-21 , added Dr.Khan.
A parent of pre primary student Adv. Azhar Pathan expressed satisfaction over teachers and management’s performance. Pathan said that management had already spared 5 acres land to develop ground and other sports and out door activities,this move has attracted me towards Khan campus and  this was the main motive behind admitting my daughter.
Eminent social worker and known businessman of the city Haji Nasir Khalifa Wholeheartedly gave thanks to Dr. Asadullah for choosing Solapur for his  high-tech educational project.
We are quite sure that our children will get quality education and exposure over there and they will have an opportunity to learn with their other community friends too in that English medium schools.
He says, population of Muslims in Solapur city is more than two lakh  and most of the people are keen to give quality education to their children,but unfortunately we don’t have educational institutions of national standard . He further said,It is very painful to say that  managements disputes in some known schools is badly hampering the teaching learning process.
This Mumbra based society’s project is like lamp in the dark  for us,we can expect positive  changes in our educational scenario,Haji Naseer added further.