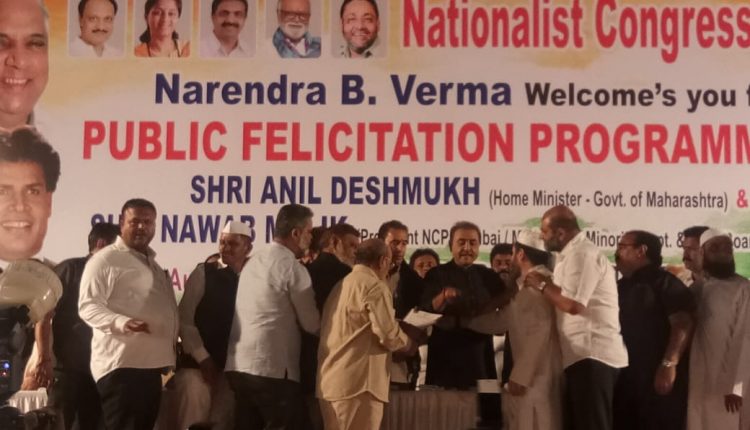 Today 13th February at jogeshwari west
Public Felicitation program of Maharashtra Home Minister Anil Deshmukh was organised by NCP National Secretary Narendra Verma at Oshiwara, Jogeshwari (West) Mumbai. Home Minister Anil Deshmukh was felicitated by the hands of former union Minister Shri Praful Patel.
On this occasion residents of Oshiwara – Jogeshwari – Versova – Andheri led by Iqbal Chunawala, Mohammed Imtiyaz Mogal, Arif Ghori,Maaz Patel, owes patel, salim chudri,Dr Talha dhukka,HafizYasim,Dr parasla,zakir sheikh, presented a memorandum to Honable Home Minister on behalf of citizens at large.
Following demands were made by the delegation, who presented the memorandum. . the delegation call upon on the Honourable Home Minister of Maharashtra, Mr. Anil Deshmukhji, to immediately take cognizance of following Demands: –
• Government of Maharashtra to pass a resolution in legislative Assembly against the implementation of NRC and Exercise of NPR.
• to withdraw all the cases registered and stay and drop all the process and procedures initiated against the Protesters of CAA and NRC. (We Demand withdrawal of cases and C.R. registered at Oshiwara, Amboli and D. N Nagar Police stations against the protesters. As well, all the notices issued to our mothers / sisters and others at Mumbai Bagh and the Cases lodged all over Maharashtra against the protesters of CAA, NPR and NRC be withdrawn)
• that protestors be allowed to continue to protest peacefully in exercise of their fundamental rights under the Indian Constitution without any threat of use of force by the police or other law enforcement agencies.
• that peaceful protest is a democratic right protected by the fundamental law of the country and India’s international law obligations, and the same should be recognised and respected.
Honable Home Minister Anil Deshmukh assured the delegation that the government is concerned about the subject matter and no injustice will be made and he will look into the matter and do needful