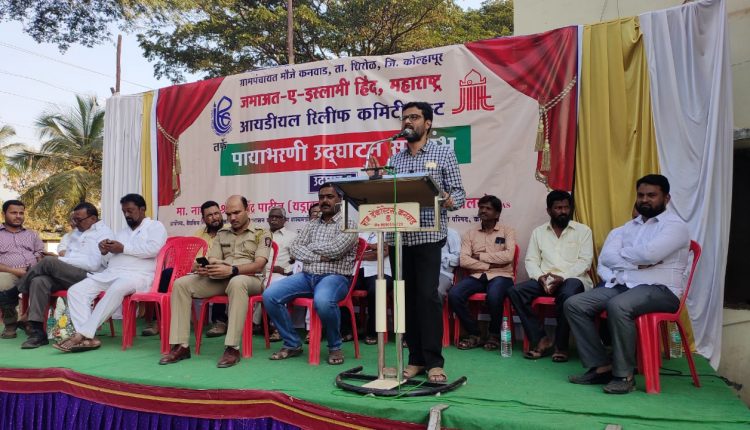 Jamaat-e-Islami Hind (JIH) Maharashtra and Ideal Relief Committee Trust (IRCT) laid the foundation stone for the new houses which are being constructed here for flood victims. A Memorandum of Understanding was signed between the IRCT and the Zilla Parishad on the 20th of January this year, under which JIH had selected the village of Kanwad (district: Kolhapur) for this project.

A foundation stone laying ceremony was held today. Of the 38 houses that are to be constructed under this project, the foundation stone was laid for the house that is to be allocated to Mr. Anil Bhimu Shahpure. This ceremony was attended by the Vice President of JIH Maharashtra Syed Zameer Qadri, DSP Kishore Kale, BDO of Shirul, Shankar Kotke, social activist Chandrakant Yadav, Gani Ajrekar of Muslim Boarding Kolhapur and Engineer Asif Jamadar.

The District President of JIH Kolhapur, Mr. Nadeem Siddiqui, had convened today’s program. Syed Zameer Qadri presided over this event while DSP Kishore Kale of Jaisinghpur delivered the inaugural address. Balasaheb Arsaganda, the Sarpanch of Kanwad, was the Chief Guest.

In the first phase, houses would be constructed for 38 displaced families, and two purifier systems for clean water would be provided.

The program began with a recitation of the Qur’an. Next, Mr. Mazhar Farooq, Secretary (Social Service), JIH Maharashtra gave a report of the relief work conducted by JIH during the recent floods and presented the rehabilitation plan. He recounted that they had reached Kanwad from Maheshal using rafts and helped all victims irrespective of their religion or caste. He said that they want to turn this village into an ‘Ideal Village’. He explained that an ideal village is not only about hygiene and cleanliness, good roads, spacious houses and other facilities; the people residing here, of all classes and communities, should purge their hearts of all malaise and come forward to help each other, they should empathize with each other and paint a picture of unity and mutual cooperation. We would then find a prosperous India in this small village, and wee should all strive to this end, he said.

Kanwad’s Sarpanch, Arsaganda, was impressed with the selfless service displayed by JIH volunteers. He said that these people have a passion for human welfare and well-being. This organisation (JIH) has been putting aside differences of religion and caste to engage in social service since many years. They came to our aid whenever we called them. They even went out of their way to help us, preferring us to their own. The local youth and all others, too, attested to the passionate social work of JIH volunteers.

DSP Kishore Kale of Jaisinghpur said that while many organisations and NGOs came forward to provide help in the aftermath of the August 2019 floods, the work done by JIH stands out amongst the rest. He assured that the administration would provide them with all required help in this regard.

JIH Maharashtra’s Vice President, Syed Zameer Qadri, averred that JIH has always been at the forefront in serving our beloved nation. The teachings of Prophet Muhammad ﷺ encourage us to undertake these tasks. We are doing all this with the sole purpose of pleasing God, and it is an integral part of our planning. He also cautioned that we need to take care of our environment, lest such a calamity befalls us again.