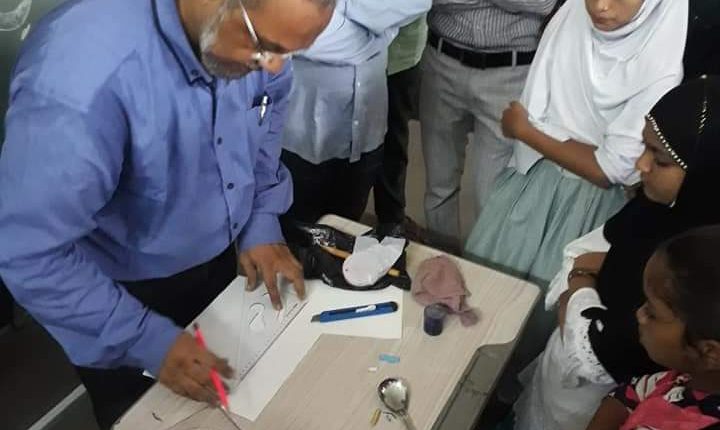 End of an era in Urdu Calligraphy ……
Dr. Rehan Ansari, co-creator of Urdu font “Faiz Lahori Nastaleeq” passes away at 57.

Bhiwandi : A medical doctor by profession, a passionate Urdu lover by emotions and an ardent calligrapher by passion, Dr. Rehan Mohd. Yusuf Ansari, a resident of Bhiwandi, a town near Mumbai, known for powerlooms, has passed away on Saturday, 12th January 2019 due to major cardiac attack. He breathed his last at 4:41 p.m. at Horizon Hospital, Thane after shifted from Bhiwandi’s Meher Hospital in the afternoon. Earlier in the day, major cardiac arrest occurred in the morning while he was preparing himself for his daily routine, relatives rushed him to nearby Meher Hospital where he was given preliminary treatment but his critical condition necessitated to shift him to Horizon Hospital, Thane. His brother in law Mr. Malik Momin intimated that he succumbed to the attack in the evening at 4.41 p.m. Later, at 11.00 p.m. his funeral was performed at local mosque and graveyard where thousands of his relatives, friends, well wishers, students and patients said goodbye with teary eyes.

Dr. Rehan Ansari born in a middle classJulaha but educated family of Bhiwandi in 1961. A bright student in school and college was nurtured by his uncle Late Mr. Shabbir Rahi, former Chairman of Bhiwandi Municipal Council, poet, writer and a fiery speaker. He did his BUMS from Tibbiya College, Mumbai and started practice as family physician in Bhiwandi. Later he went on to become a fearless journalist, columnist, an expert calligrapher, creator of Urdu font Faiz Nastaleeq, a guardian of his mother tongue ‘Urdu’ and enthusiastic promoter of Urdu calligraphy among teachers and students. During his college days he won many awards and accolades, some at the hands of well known personalities such as Mr. Yusuf Khan (Dilip Kumar). His clinic was inaugurated by the social worker and messiah of poor people of Mumbai (then Bombay) Mr. Haji Mastan Mirza.

He has been writing article on various topics such as Science, Education and Politics which regularly been published in various Urdu newspapers and magazine across the country. With his friend Mr. Abdul Jalil Ansari, he started the only weekly Urdu newspaper of Bhiwandi “Subh-o-Shaam”.

In his early childhood his uncle Shabbir Rahi took him to Mr. Aslam Kiratpuri, a well known calligrapher and asked him to train and teach basics of Urdu calligraphy. Mr. Aslam Kiratpuri expressed in a programme organized to mourn Dr. Rehan’s death that, “Rehan was so enthusiastic that he spent six to eight hours daily in practicing the calligraphy and soon became an expert calligrapher of Nastaleeq. Later the trio, Dr. Rehan, Mr. Aslam Kiratpuri and Sayyed Manzar Husain created the famous “Faiz Lahori Nastaleeq” Font for Urdu typesetting. Aslam Kiratpuri stated that the earlier “Noorie Nastaleeq” which was developed in Pakistan has only twenty thousand ligatures (a character or letter joining the two or more characters or letters) while in Faiz Lahori Nastaleeq they have developed around forty thousand ligatures, double the Noorie Nastaleeq. Dr. Rehan Ansari did the tracing of the ligatures so that they can be accommodated in Urdu software. He has also written books on health issues, for his book “Shaoor-e-Sehat” Maharashtra State Urdu Sahitya Akademi awarded him.

He was very compassionate human being always ready to help the needy, a devoted lover of the language closes to his heart “Urdu” and has always strived to promote it by every means. He sent all his children to an Urdu medium school. His daughter recently qualified as M.B.B.S. His son is doing Engineering in IIT Mumbai. The other two daughters are studying in high school. His wife, a high school teacher said, “He was very supportive and always encouraged all the children of the family to pursue higher education. He used to tell the family members that spent less but more on education of your children.” 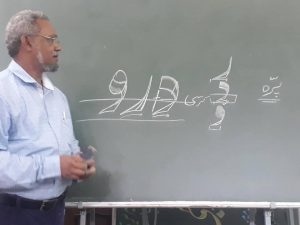 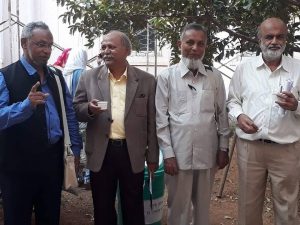 Since the last two years, he was taking classes of Urdu Calligraphy every Sunday at E-Library, Rais High School, Bhiwandi without any fees just to ensure that the future generations both treasure and learn the art of Urdu Calligraphy. In an earlier interview he said that “This art has helped me a lot in being a doctor. Observing the words, the art of turning the hand and setting words in a proper shape is a unique art which is called calligraphy and it needs sincere efforts. I regularly use a blackboard as a teaching aid to draw letters and explain the various aspects of calligraphy.” Many students of his calligraphy class express grief over his untimely death and stated his death a loss to the language and art of calligraphy. One of his Whatsapp Group “Khattatul Hind (Calligraphers of India)” member told that Dr. Rehan was very keen observant of calligraphy as he used to point out the minute of the mistakes in Khattati. He used to rectify the mistakes and give suggestions to improve the writing without any annoyance.
A number of condolence meetings were held to acknowledge his work and efforts in Bhiwandi, Mumbai, Malegaon and Dhulia etc. May His soul rest in peace.
“Maut uski hai kare jiska zamana afsoos
Yun to duniya me sabhi aaye hain marne k liye”

The Tigress of Bengal Who Has Torn Apart the Gujarati Lotus Supreme Court’s Order – A Moral Victory for Mamta Banerjee *By: Dr. Saleem Khan*

To hell with #DeMonetisation