Aamna Samna Media
Mumbai:- In an attempt to protect ‘Shariah’ and stop Govt’s interference in it ,Muslim women staged silent protest  against central governments Tripple Talaq Bill which is going to be tabled in Rajya Sabha.It was held on wednesday  near railway station ,Mira Road.
Protest was organised by All India Muslim Personal Law Board (Ladies wing).
More than 500 Ladies came on road holding  Placards in their Hands displaying messages
“we can’t Tolerate change in our Islamic Sharia Law”
“Triple Talaq Bill a fraud of govt and Unconstitutional” etc.
Protest was claimed to be  successful by the organisers and it sends clear messages  that  women from Muslim Community are not in the favour of such biased bill and they don’t tolerate   interference of the government in Sharia law.
Later memorandum addressing Governor of Maharshtra  was handed over to the  Sr.Inspector of police,Mira Road Police station.
Through memorandum ladies wing
says,The bill was processed without taking religious leaders into confidence.They
demanded that Tripple Talaq Bill should be taken back the govt.because it anti women , anti child and unconstitutional.
According to Tahera Azeem our ‘Shariah'(Islamic Law) is enough for us  we don’t tolerate interference at any cost.She further raised questions on govt.Tripple Bill’s punishment and other provisions.
Tahera says,As per the bill Tripple Talaq giver man will  be awarded three year jail ,what about that divorcee woman?It will  ruine her  life ,she may lose her social status ,she added.
Activist of AMPLB Salma Beg ,Tahera Azim Farzana Iqbal and others were also present. 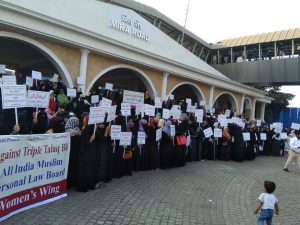