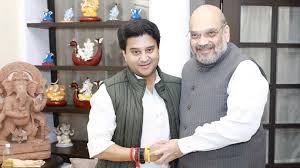 A day after he joined the Bharatiya Janata Party (BJP), Jyotiraditya Scindia was welcomed by Home Minister Amit Shah.

“Met Shri @JM_Scindia ji. I am sure his induction into the party will further strengthen BJP’s resolve to serve the people of Madhya Pradesh,” Shah said on Twitter. He also posted a photo of hugging and greeting Scindia.

Scindia, the Madhya Pradesh politician whose surprise exit from the Congress has brought the Kamal Nath government to the brink of collapse, joined the Bharatiya Janata Party on Wednesday. Scindia joined the BJP at an event in national capital Delhi in the presence of party chief JP Nadda.

Scindia had ended his 18-year-old association with the Congress on Tuesday after meetings with Shah and Prime Minister Narendra Modi. He had thanked PM Modi and Shah for making him a part of their family.

In his resignation letter to Congress chief Sonia Gandhi that Scindia put out on Twitter soon after, he alluded to his discomfort in the party over the last year or so. “…as you well know, this is a path that has been drawing itself out over the last year,” he had written in his letter.

It was seen as a reference to the Congress settling for Kamal Nath as the chief minister after the 2018 state elections though it was Scindia who had led from the front to oust the BJP from Madhya Pradesh. Scindia’s supporters had hoped that the Congress would tell Kamal Nath to give up his second charge – as the party chief in the state – but this also didn’t happen.

Coronavirus: ‘Get paid to buy car’ is how Chinese cities are luring customers