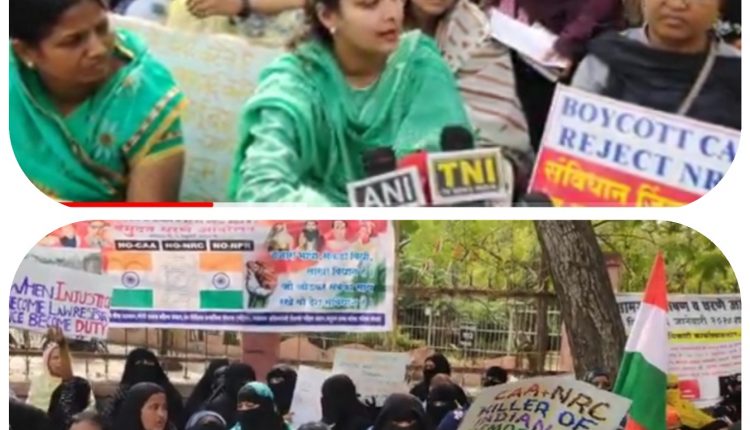 Solapur Shaheen Bagh in action
aamna samna network
Solapur (Maharashtra)
After Delhi, Mumbai Pune,Buldana, Mumbra and several cities and taluka places of the state, Solapur Shaheen Bagh is now in action to raise voice against NRC and CAA and NPR, from 2nd  February near poonam gate, Zilla Parishad.
On the response from women of all age group is over whelming, about 1500 including nearly 800 women from all communities attended the protest.
According to press note released yesterday Bheem Army (Women’s Wing), Jijau Brigade, Bhartiye Bodhha Mahasabha, Sant Rohidas Samajik Sanghtna, Bahujan Hak Parishad, Raj Mata Ahilya Devi Mahila Sanghtna, Phule Shahu Ambedkar Padmashali Vichar Manch and Lodhi Samaj Mahila Sanghtna have taken the initiative. Female activists of all these NGOs are part of the protest.
It is notable that MLA (Solapur central) Praniti Shinde visited the place and extended her support. Speaking with media Praniti demanded to withdraw this dangerous act. She said, we are here to save our constitution.Two states have already passed the resolution against this act, we expect that Maharashtra govt. Will do the same and it will not be implemented in our Mahasabha state.She added further.
Bheem Army District General Secretary Darshna Gaikwad who is leading this protest spoke to aamna samna media and expressed happiness over huge presence of Muslim women. Unless and until the central govt. revoke this Citizenship Amendment act, we will keep fighting for 24×7, added Darshana.