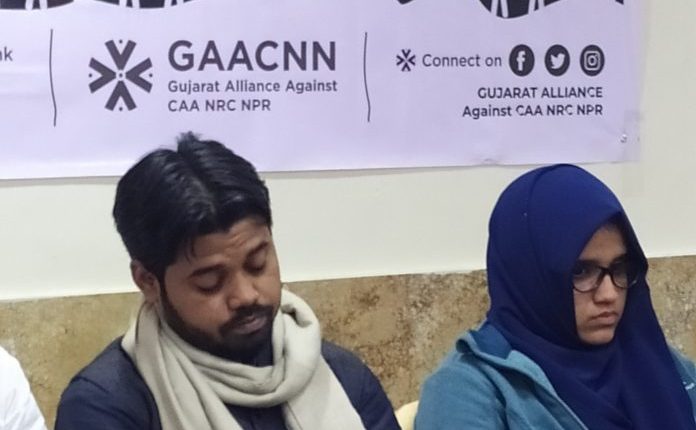 Jamia Millia Islamia has become the center of anti-CAA stir in the country. Its “shero” Ayesha Renna and other student leader Asif Iqbal Tanha today reiterated that ongoing protest and agitation would be continued till this black law could be repealed. Addressing a press conference which was organised by GAACNN (Gujarat Alliance Against CAA, NRC,NPR),both students narrated the police brutality on that fateful day -15th Dec. 2019. They accused  that this law was discriminatory and disharmonious and would divide  the people on the line of caste and religion.

They  claimed that police lobbed tear gas inside the university reading room and then forcefully entered inside and “beat all the students studying inside the library brutally”. They went  to say that the cops continued beating the students while they were taking them out.
Asif Iqbal Tanha described Delhi Police’s action as “unprovoked targeting of innocent students”.”This unprovoked targeting of the innocent students, who had nothing to do with the crowd, resulted in a severe and inhuman beating which led to the fracture of hands, legs and one student lost his eyesight because of a direct hit on the left eye by (police) lathi,He further said that  the students were taken into custody immediately after they were beaten up without any medical assistance. It claimed that some students were kept in two police stations-one batch in New Friends Colony and the other in Kalkaji.
Ayesha who is now face of this protest, was with fellow student Ladeeda tried hard to save a male student from police, told today that  they stood up to cops who were chasing down the protesting students and beating them up. Ayesha Renna, a history student and Ladeeda Sakhaloon, a BA Arabic student, were seen shielding Shaheen from the police in a video that went viral.
Recalling the incident, Renna said around 5.30 pm on Sunday, they saw people at the front running back and cops charging at them. “We went inside the garage of a house and stayed there. There were nine of us girls and one boy. The gate couldn’t be closed because a car was blocking it,” she was quoted as saying. She further said a few policemen surrounded them and asked them to come out and assured them that they would not be beaten. “We refused but suddenly one of them dragged the boy out and we were pulled out too. They then started hitting all of us with lathis,” she added.
Ayesha Renna is a 22-year-old history student at Jamia Millia Islamia, Delhi and hails from a small town in Kerala’s Malappuram district. She shot to fame after she intervened when a male protester was being lathi-charged by the cops during anti-CAA protests. Ayesha Renna along with her friend Ladeeda Farzana formed a shield over the male protester and saved him from brutal baton charging by the security personnel. The video went viral on social media and garnered a lot of praise for the women’s courage.
Asif Tanha  who also SIO member told here that a FIR was registered against him and other two students -AISA member Chandan Kumar,  and CYSS member Kasim Usmani,  He said that I reject the charge that I instigated anyone… At the time the action happened, I was in campus attending a meeting with the alumni and Jamia Teachers Association.”Asif added that Hundreds of Jamia Millia Islamia students gheraoed Vice-Chancellor Najma Akhtar’s office last week , demanding the registration of an FIR against the Delhi Police in connection with last month’s violence.Renowned advocated Mr. k. Khosti and trade union leader MR. Asim roy also addresses the media and vowed to fight against CAA,NRC and NPR till this government is uprooted.