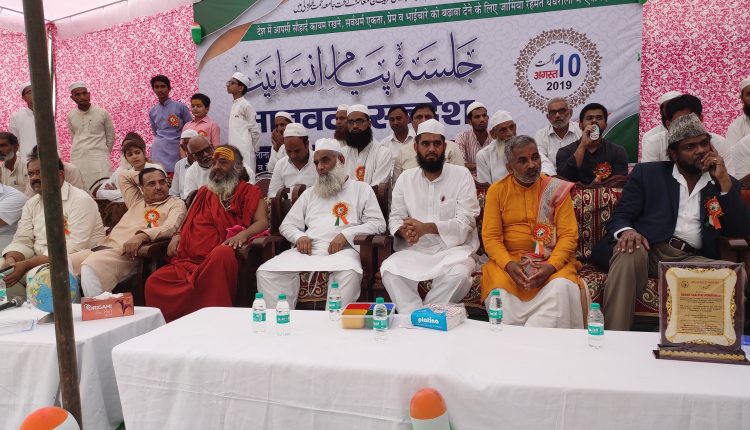 On Saturday 10th August 2019 A program with the title of, Message of Humanity, was held on the occasion of Independence day under All India Milli Council Saharanpur at Jamja Rahmat Ghaghroli Saharanpur. Programme was presided by Shree Sahjanand, Mahant Shah Kumbari. Haji Fazlurrahman Aleeg, member of Parliament Saharanpur, participated in the program as special guest. Besides, great teacher of Darul Uloom Waqf Deoband, Mufti Muhd Ihsan Sb Qasmi, Shah Ateeq Ahmad Sahab Khanqah Raipur, Mr Sunjay Garg, MLA City Saharanpur, Mr Sanjay Prapna Acharia Jasmore, Chaudhary Jaan Nisar Advocate, Maulana Shamshair Al Hasani and other guests enhanced the charming of the program. The program commenced with the recitation of the Holy Quran and Naat recited by a student of Jamia. First of all, the students of Jamia delivered their speeches on various topics in different languages before the gathering and got the appreciation from them. Shaikh shafat Muhammad addressed the audience, he said in his speech that all the human are descended from a single pair i e. Adam and Hawwa, peace be upon them, and then we were devided in to tribes so that we could recognised each other. Further, he said that being a human we should help each other because human is a superior in all the creatures of Allah, while we are commanded to take pity on animals, so why we should not behave good with human. After that, coming from far and wide, Milli, social, political and religious leaders shared their ideas on topic of message of humanity.  Everyone emphasized on the importance of conveying this message and congratulated Convener of the program. Special guest Haji Fazlurrahman Aleeg Sahab got the, istiqbalia, by the Convener of the program. Rshee pall Singh was covered with Shall by Maulana Abdul Malik Mugheesi. In the last (Maulana Dr) Abdul Malik Mugheesi, principal Jamia Rahmat Ghaghroli Saharanpu, Distt :President All India Milli Council Saharanpur, thanked heartedly all the guests and ended up the program with his prayer.

Saturday on the occasion of celebration of Republic Day, a brief but meritorious…

Encircled in this news clip is Mohammad Rizwan, 24 years, a 2nd year student of…