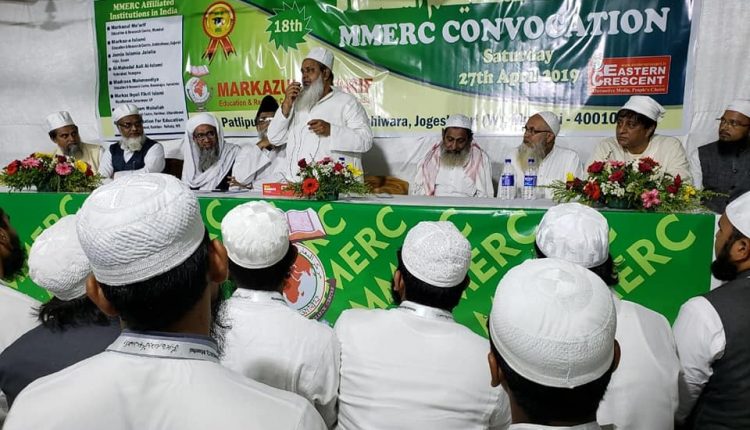 Mumbai: An impressive function of 18th Convocation of Markazul Ma’arif Education and Research Centre (MMERC) was held in Mumbai on Saturday, 27th April, 2019 which was presided over by the grand Mufti of Maharashtra Mufti Azizur Rahman Fatehpuri.

In the function 29 madrasa graduates who completed two-year Diploma in English Language and Literature (DELL) course in MMERC, Mumbai in their post madrasa academic quest were conferred with certificates and precious awards by the dignitaries and intellectuals of the city for their outstanding performances in academic as well as co curricular activities.

The chief guest of the program Maulana Badruddin Ajmal, a well-known Islamic scholar, Lok Sabha MP from Assam’s Dhubri and the founder chairman of MMERC, presenting heartfelt congratulation to the new MMERC graduates said, “Today the Muslim community, the country and the world need such ulama whose characters and ethics are as white as white-dress and by the grace of Allah Almighty you are adorned with such beautiful qualities therefore you should enter in the practical field without any hesitation and fear. Moreover, you do not need to come under any kind of pressure because you have ample knowledge of the glorious Qur’an and Hadith that have the true power to lead and guide the world.” Maulana Ajmal further asked the graduates, many of whom are previously qualified from different reputed institutions like Darul Uloom Deoband and Nadwatul Ulama Lucknow ‘to be the ambassador of peace and wisdom’ wherever they go and even at tough times.

Maulana Muhammad Burhanuddin Qasmi, the director of MMERC and editor of Eastern Crescent, in his farewell speech addressing the graduates said that you always will have to be mindful that this institution was established in 1994 by Muhsin-e Millat Maulana Badruddin Ajmal Al-Qasmi and his sincere collogues, particularly, to serve Islam, Muslims and our country India, therefore, you have to be extra cautious in this regard as service of Deen is not limited to only masjid and madrasa rather, it has numerous branches that must be taken care of by you enlightened people. “Your sincerity to this nation, love for fellow human beings and skills to cope with adverse situations will ensure your success in your life ahead. You are capable, go and explore the world”, he urged his students. Maulana MB Qasmi also remembered Mohammad Rizwan, a student of this very 2017-19 batch of MMERC who passed away while in the class a few months ago.

The guest of honour Maulana Mahmood Daryabadi, general secretary of All India Ulama Council addressing the graduate said, “You are a young blood that is a great strength but you must remember only emotion is not enough in practical fields, therefore, you need to do your work with wisdom and good plan and for that you will have to take guidance from your experienced elders. The other guest of honour Mufti Faizul Waheed Qasmi in his elaborated speech said, “Though you have gained certificate today for discharging your duties but for achieving honor in the eyes of people and acceptance in the eyes of Allah (swt), you will have to prove yourself practically and you have to adopt patience, fear of Allah and sincerity.”

Maulana Muddassir Ahmad Qasmi, the National Coordinator of DELL course and Assist. Editor of Eastern Crescent, informing the audience said, “This year 29 meritorious madrasa graduates have completed their Diploma Course and out of them 24 are given in-campus placements by MMERC in different institutions or organizations for teaching and preaching purposes and remaining 5 will continue their education in prestigious universities of India and abroad. He further said, ’Alhamdulillah, 95% of MMERC graduates are purely associated with different social, educational and religious missions in India and in other 20 different countries of the world.”

The president of this gala function Mufti Azizur Rahman Fatehpuri addressing the pass out ulama said, “Sincerity is a must for any religious work, therefore, wherever you go, do your respective works with utmost sincerity.” Encouraging the graduates he further said, “You have added one more feather of modern education in your crown while you were already well-versed in religious education, now, you have double responsibilities on your shoulders. So do not become only a man of words but utilize your inner power too for getting desired goal and fulfilling the cherished dream of this institution. More importantly, keep in touch with public because evil powers always try to detach ulama from public for spreading averseness towards Deen.” The grand of Mufti of Maharashtra further added, “Remember that competent ulama should work as per the demands of time.”

NB: News for publication and public circulation.
Thanks
MB Qasmi