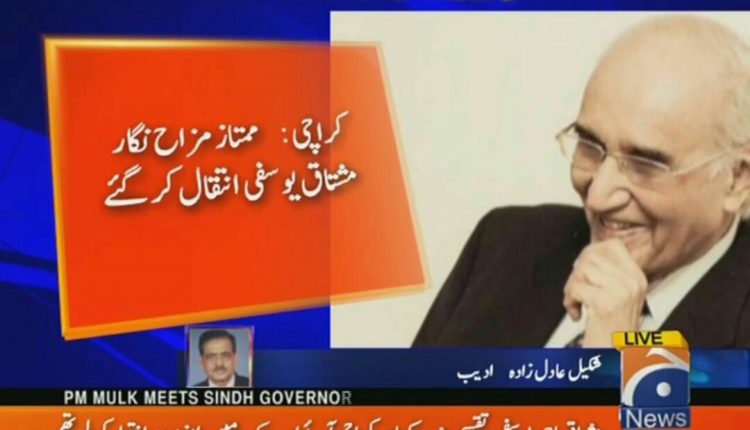 Renowned novelist, writer and banker, Mushtaq Ahmed Yousufi, is reportedly dead. One of the best Urdu novelists of the era, he breathed his last in Karachi on Wednesday. He was 95.

While Mushtaq Ahmed Yousufi’s cause of death hasn’t been officially announced, he was not keeping well for the last several months and was reportedly battling pneumonia.

Mushtaq Ahmed Yousufi was not just a world class novelist and humorist, he was also one of the top bankers of Pakistan who headed different banks in the country and went on to head the banking council of Pakistan.

Born on August 4, 1923, in district Tonk of Rajasthan, India, he spent more than three decades there and migrated to Pakistan in late fifties. Yousufi belonged to a leading political family of Tonk, Rajasthan of the time. His father Abdul Karim Khan Yusufi was chairman of the Jaipur Municipality, and later Speaker of the Jaipur Legislative Assembly.

Not many people known that Yousufi was a top banking professional and led many banks in Pakistan. After migrating to Pakistan in 1956, he joined Muslim Commercial Bank and soon rose to become its deputy general manager. Later, he Joined Allied Bank Ltd in 1965 as managing director. In 1974, Mushtaq Yousufi became president of United Bank Ltd. In 1977, he became chairman of the Pakistan Banking Council. He was awarded Quaid-i-Azam Memorial Medal for distinguished services in banking. He was also awarded Sitara-i-Imtiaz in 1999 and Hilal-i-Imtiaz in 2002, the highest literary honour given by the government to civilians.

He started writing rather late. His Chiraagh Talay (1961) has established him as a humorist who knew how to use repartee and pun. His other works, Khakam Badahan (1970), Zarguzasht (1976) and Aab-i-Gum (1990) only reaffirmed his status as a great wit and a master prose writer of Urdu. What makes Yousufi remarkable is not only his wordplay and repartee, but his refraining from traditional ways of invoking mirth, such as situational comedy or slapstick. His one-liners are often quoted in Urdu’s literary works.

His last work, Sham-i-Shair-i-Yaran came merely four years ago in the year 2014 when he had turned 91. Ibn-e-Insha, one of the best satirist and humorist, while writing about the genius of Mushtaq Ahmad Yusufi said, “…if ever we could give a name to the literary humour of our time, then the only name that comes to mind is that of Yusufi!”

After sparking protests in Pakistan, Dutch lawmaker Geert Wilders has now decided to…